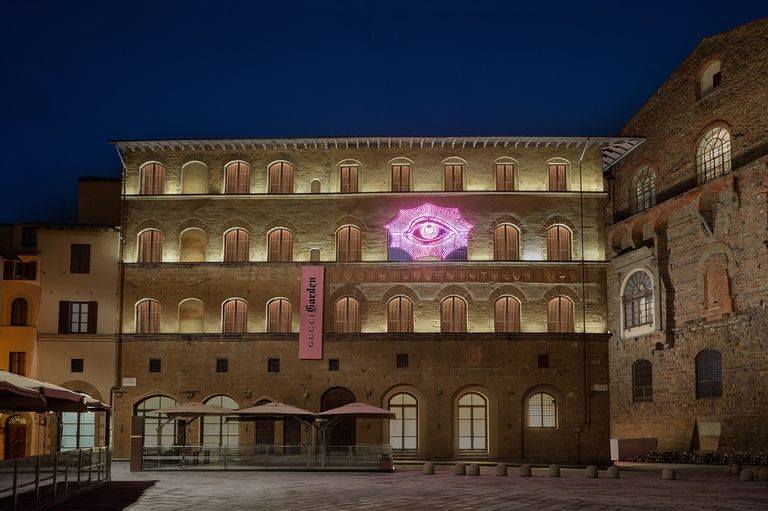 While Gucci has been a hub for eclectic prints, posh products and must-have accessories ever since Alessandro Michele took over as the designer at its helm, the brand announced today that their new concept store in Florence will also sell pasta–yes, pasta. And not just any pasta, we’re talking about Michelin-starred fine dining from the one and only Massimo Bottura of the world-renowned, Modena-based Osteria Francescana.

What brought on Gucci’s entree to the restaurant business? It’s not as simple as wanting to join the ranks of fashion-designer-turned-restauranteurs like Ralph Lauren, Versace, Giorgio Armani, and Tiffany & Co.’s latest Blue Box Café.

Gucci Garden, the brand’s latest concept store in Florence, opened its doors today at the Gucci Museo, which opened in 2011 at the ancient Palazzo della Mercanzia. The landmark back to 1337 and sits between the famous Piazza della Signoria, home of the Uffizi Gallery, and Piazza di San Firenze. Gucci’s goal? To take the traditional retrospective concept of a museum and reimagine it as a collaborative, creative space where clothing, art, video installation, accessories, and heirlooms are showcased throughout the space, organized by design theme rather than when they were introduced.

Where, might you ask, does the pasta come in? On the ground floor, where Massimo Bottura has been charged with opening an intimate (50-seat) restaurant, the Gucci Osteria. Rather than take dishes from his acclaimed Michelin-starred flagship in Modena and adapt them for a Florentine, fashion-loving crowd, Bottura has created an entirely new menu for Gucci. The Osteria will serve iconic Italian dishes as well as contemporary twists on classics for all-day dining. Expect options like Parmigiano Reggiano tortellini, pork buns and a decadent mushroom risotto.

The restaurant will join a bazaar-like retail space on the ground floor, which will feature one-of-a-kind pieces designed exclusively for Gucci Garden. The aim is to hearken back to Florence’s roots as a hub of activity–where markets, restaurants and various shops lined the Palazzo where the ‘Garden’ is now based, selling handmade crafts and delicacies. A ticket to enter will cost you about 8 euro (about $9.55), but half of each ticket price will be donated to support various restoration projects around the city of Florence.